Generating electricity and energy conservation for individual consumers is referred to as micro-generation or micro renewable energies, these include:

For every system you’ll need to take into account local building regulations, the location of your home ie. living near in area zoned as an area of outstanding natural beauty, grade 2 listed and is roof suitable for panels?

Solar thermal (hot water) is a renewable energy system for generating domestic hot water using solar panels (known as ‘collectors’) fitted at an optimal angle on a south‑facing roof or other suitable surface.
Solar heat warms fluid, usually anti-freeze, in the collectors and this is then pumped to heat water stored in a hot water cylinder.

A boiler or immersion heater tops up the water to the temperature set by the cylinder’s thermostat (>60°C).
In England, planning permission is not needed for most home solar water heating systems, as long as they’re below a certain size – but you should check with your local planning officer, especially if the premises is a listed building, or in a conservation area or World Heritage Site.
Benefits of solar thermal:

These are gaining widespread popularity in the UK.
Solar panel electricity systems – also known as solar photovoltaics (PV) – capture the Sun’s energy using photovoltaic cells. These cells don’t need direct sunlight to work; they can still generate some electricity on a cloudy day.
The cells convert the sunlight into electricity, which can be used to run household appliances and lighting.

A solar panel system for a family of three costs around £4,000-£6,000 in the UK.
Solar panels could reduce your monthly energy bill by nearly 50%.
Buy a solar battery and you’ll use all the energy that goes to waste in the daytime.

In England permission is not required for most home photovoltaic systems, as long as they’re below a certain size – but you should check with your local planning officer, especially if the premises is a listed building, or in a conservation area or World Heritage Site.

Air source heat pump installations may be considered as Permitted Development in England, but the criteria are complex so it is always a good idea to check with your local planning office. 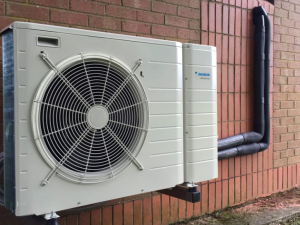 As a general rule, air source heat pumps are generally easier to install than ground source heat pumps as they do not require any land to be dug up for installation. They look similar to air conditioning units and are typically mounted on to an external wall outside a property. The external until is connected to an internal unit containing circulation pumps and hot water, which is usually smaller than the average boiler.

Unlike gas and oil boilers, heat pumps deliver heat at lower temperatures over much longer periods. During the winter it generally needs to be on constantly to heat the home efficiently and you would still need a boiler to top up heating.

Ground source heat pumps use pipes which are buried in the garden to extract heat from the ground. This heat can then be used to heat radiators, underfloor, or warm air heating systems and hot water in your home.
A ground source heat pump circulates a mixture of water and antifreeze around a loop of pipe which is buried in the garden.
Heat from the ground is absorbed into the fluid and then passes through a heat exchanger into the heat pump.

The ground stays at a fairly constant temperature under the surface, so the heat pump can be used throughout the year – even in the middle of the winter.
The length of the ground loop depends on the size of the premises and the amount of heat needed. Longer loops can draw more heat from the ground, but need more space to be buried in. If space is limited, a vertical borehole can be drilled instead.
In England, domestic ground source heat pumps are generally allowed as permitted developments, but check with your local authority to find out whether you need planning permission or not. Due to the amount of earthworks required cost is usually prohibitive.

Wood-fuelled heating systems, also called biomass systems, burn wood pellets, chips or logs to provide warmth in a single room or to power central heating and hot water boilers.
A stove burns logs or pellets to heat a single room – and may be fitted with a back boiler to provide water heating as well.
A boiler burns logs, pellets or chips, and is connected to a central heating and hot water system. A wood-fuelled boiler could save nearly £600 a year compared to electric heating.

A flue will be needed which meets the regulations for wood-burning appliances: a new insulated stainless steel flue pipe or an existing chimney – though, chimneys normally need lining to make them safe and legal.
You may not need planning permission, but you should always check. All new wood heating systems have to comply with building regulations.

Biomas is usually suited to commercial buildings that have a higher demand for energy and have space for storing wood pellets.

Wind turbines harness the power of the wind and use it to generate electricity.
Of all the wind energy in Europe, 40% blows over the UK, making it an ideal country for domestic turbines (known as ‘micro-wind’ or ‘small-wind’ turbines).
A typical system in an exposed site could easily generate more power than your lights and electrical appliances use.

Wind turbines use large blades to catch the wind. When the wind blows, the blades are forced round, driving a turbine which generates electricity. The stronger the wind, the more electricity produced.

There are two types of domestic-sized wind turbine: 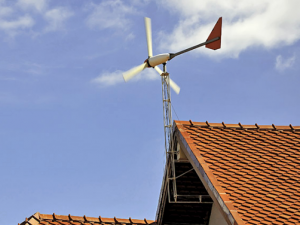 Pole mounted: These are free-standing and are erected in a suitably exposed position, often around 5kW to 6kW.
Building mounted: These are smaller than mast mounted systems and can be installed on the roof of a home where there is a suitable wind resource. Often these are around 1kW to 2kW in size.
If the turbine is not connected to the local electricity grid (known as off-grid), unused electricity can be stored in a battery for use when there is no wind.
In England a domestic wind turbine may be classified as Permitted Development, in which case planning permission is not needed but its always best to contact your local planning office to check whether planning is required.

For building-mounted turbines, the criteria include:

For pole-mounted turbines, the criteria include:

And for both types of turbine:

Running water can be used to generate electricity, whether it is a small stream or a larger river.
Small or micro hydroelectricity systems – also called hydropower systems or just hydro systems – can produce enough electricity for lighting and electrical appliances in an average home.

All streams and rivers flow downhill. Before the water flows down the hill, it has potential energy because of its height. Hydropower systems convert this potential energy into kinetic energy in a turbine, which drives a generator to produce electricity. The greater the height and the more water flows through the turbine, the more electricity can be generated.
The amount of electricity a system actually generates also depends on how efficiently it converts the power of the moving water into electrical power.

Installing a hydro system can be expensive, but in many cases it’s less than the cost of getting a connection to the National Grid if the premises does not already have one.
Hydroelectricity is green, renewable energy and doesn’t release any harmful carbon dioxide or other pollutants.
Hydropower is very site specific. Most homes will not have access to a suitable resource even if they have a watercourse running nearby. Assessing a hydro site properly is a job for a professional.
To be suitable for electricity generation, a river needs to have a combination of:

If your home improvement work requires scaffolding, such as a loft conversion, this would be an ideal time to install solar panels. Scaffolding is a significant part of the solar installation costs, so combining it with other works could make them much more cost-effective. Solar panels are most effective on south-facing roofs at a pitch of around 30 degrees.

There are various other factors to consider when thinking about whether your home set up works and how best to maximise the installation. For more information on installing renewable energy system at home, see here .

Lighting accounts for 15 per cent of a typical household’s electricity bill. It’s good time to consider changing to LED bulbs.

LEDs are the most efficient light bulb on the market and have made significant advancements since their early days of low quality lighting. They are available with varying degrees of brightness, colours, and ‘colour temperatures’ – from warm white to cool white in appearance – and can suit almost all light fittings. Although the cost of bulbs is coming down, it can sometimes appear prohibitive, so consider the most used lights throughout your home as a first step.

Make sure your extension is insulated to Building Regulations. You could Consider having the rest of your home to insulated as well. If your home has cavity walls, a layer of insulation can be blown into the cavity.

If you have solid walls (usually homes built before 1920), you can have either internal or external insulation added. Applying external insulation at the same time as your extension would ensure the exterior finish to the main building matches the extension, improving the aesthetic of your home.

External insulation will also make those cold rooms in your home warmer and, so long as sufficient ventilation is maintained, it can help alleviate many causes of damp and mould. Furthermore, solid wall insulation could save around £225 a year from the heating bills of a typical gas-fuelled semi-detached home. Savings could be significantly higher in detached properties, around £375 per year in a typical gas-fuelled detached home.

Planning your new bathroom is a great time to think about being more efficient and reducing water usage throughout the home. There are many different types of shower head that aerate the water thereby reducing water usage without a negative impact on your shower experience. A water efficient shower head could save a four person household (e.g. a family of four or even a shared student flat) around £40 a year on gas for water heating, as well as a further £55 a year on water bills if using a water meter. You should also look for low-flush toilets – saving at least one litre of water per use.

If you’re adding extra heating to your bathroom, such as a towel rail or underfloor heating, make sure it is installed with easy to use, accessible controls, we’ll show you how to use heating controls so your being efficient as possible.